Recently I’ve noticed that I don’t particularly get nervous like I did when I was first performing as an 18-22 year old in college. I do still get nervous when I’m doing something new or out of my comfort zone. But in general performances where I am playing songs I’ve done many times, I don’t get nervous. However, I do have an “excitement” that drives me to do my best. The way I distinguish between nerves and excitement is that nerves typically negatively affect the performance while excitement puts you in a great musical mood where you want to create music for (or with) your audience.

An example of nerves: My university has “applied music hour” which is a lunch hour performance class that most music students have to take. As a sophomore I had to play once a semester and the number of performances increases based on grade year. The first couple of performances I had resulted in many missed notes, forgetting whole sections and lots of bad technique on my guitar. I would have a racing heart, sweaty palms, sometimes forget to breathe for 30 seconds or more, and I would be nauseous. Then as soon as I got off stage I would have instant relief and not want to do it again. Why was I a music major but hated performing?! Well performing doesn’t have to be a nerve filled awful experience. Which brings me to my tips for performing and how to turn nerves into excitement.

Hopefully before you perform you have taken the steps of practicing well and preparing your music (whatever style or instrument you play). I’ve played in bands, ensembles and solo. Each of those settings have had different types of preparation and performance. When you enter a performance you should feel comfortable with your part no matter how big or small it is. The expression “know your music inside and out” is pretty accurate for performing. Before you perform you shoudn’t be asking questions like, “what are the lyrics of this whole verse” or “what are the chords of the chorus.” I think it’s fine to ask smaller questions like “what are the dynamics of this part” or “what am I trying to convey with the lyrics” before performing because overall that doesn’t make or break the song.

I’ve met really cut and dry people who are not that great at interacting with people. But because they know the music really well, they are able to communicate on another level. Sometimes letting music speak for itself is enough. But other times you need more…..

One reason my heart would race before performances is because I wouldn’t breathe properly! The human body is affected drastically when it doesn’t get enough airflow.

In addition to heart rate increase there is an increase of tension. I think there is a more sciency explanation somewhere. But muscles hold in carbon dioxide and doing consistent deep breaths before performing help to alleviate tension. Similarly to cramming for exams the night before, trying to learn a lot of music right before the performance isn’t always the best way to go about it. I find that having an abbreviated practice session and then just warming up 30-60 minutes before I perform is a good way to go.

Be Organized and concise

One thing that always bothers me at performances is when the performer stumbles around looking for an extra page of music, or has 3-4 different folders they shuffle through. Think about the placement of your music before hand and any introductions or comments you are going to say about the pieces. Even when I play in pubs I usually have something I say about a particular song I wrote or if a piece is interesting. You’d be surprised what people can learn even in a noisy bar.

Practice performing at your house/practice space

Some people give others a hard time for singing in the shower, or practicing singing in front of a mirror, but if you don’t perform very often how else are you going to learn? In addition to playing for my close friends, I try and set up/have the mindset of performance at least once a week. Some things I do to put me in the mindset of performance: play guitar through my amp, record a video or record an audio file of some music I am working on and wear the clothes I would perform in.

Once you feel comfortable with the music and know how to treat yourself before you perform, you should just perform! When I was first learning guitar I would perform all the time, at churches, jam sessions, school talent shows, open mics etc. Even though I was really bad. I remember the first time my pastor asked me to play silent night on the guitar and he told this really inspirational story…. then I took about 2-3 minutes to stumble through the first verse of the song. Afterwards without commenting on my performance my sister says, “you will get better.” But then I played silent night every Christmas for the next 3 years and by the third year I was playing a finger style (much harder than just playing the melody) arrangement of the piece. Once I got more experienced I started planning my own shows, playing at venues and so on. Most people and beginning musicians think a performance has to be this mind-blowing experience where you wow the audience. But in reality most musicians have a gradual progression where they get better and better. I’ve read several musician biographies and watched several documentaries and many many “legendary” performers started out just jamming in their living room or with their friends in their garage.

This is something that will definitely be different for every person and I’m sure it will evolve for me throughout my life. But here is a nice listicle for you:

First of all, I am a 23 year old who graduated college two years ago so in no way am I an expert. But I did major in classical guitar, lead music for a student group, a church, run track and I had a long distance relationship, almost all of which at the same time one semester. I am here to tell you some tips I’ve learned and how to hone in on some creative juices. I’ll be posting this as different tips and there will be several of them. Hope you enjoy 🙂

Tip 1: The Place You Practice Matters

Here is the scene: it is my freshman year of college and I am sharing a room with not only a messy roommate but a suite full of athletes…old socks on the floor, pizza boxes (with a few leftovers) on couches or behind trash cans, staying for days (if not weeks). Not only was the space smelly and messy, but I just didn’t have much space. My guitar was under my bed in its case and I had a box with some music supplies (picks, music books etc). I was taking private lessons, but I practiced for around an hour A WEEK as a classical guitar major. The practice rooms were a 10 minute walk away or so and I would go occasionally but 10 minutes became dreadfully long (especially in the winter). Needless to say, I didn’t advance very far that semester.

It is no wonder that there are entire careers for interior decorating and space creation. Those two things can really make or break practice time and space. Luckily I had a roommate the next year as a Sophomore who wanted to be an interior decorator (now he builds and sells amps) and helped me pay more attention to my music/practice space.

There isn’t a perfect fit for everyone but here is what I learned about the space I practice in:

The point of this is to find something that works for you, make note of it and make the rest of your space like it. I often rearrange my music space if something isn’t working. Sometimes that’s all it takes. But don’t get to caught up in the process….because you still need to practice 😉

After loading a Penske truck (that’s right not a Uhaul, that’s too main stream) in 100 degree weather, traveling 20+ hours on the road with a night stay in a Red Roof Inn,  changing a flat tire on a foggy mountain top in Pennsylvania,we made it to New Hampshire! 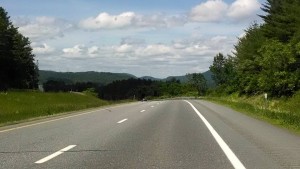 Stress levels were high and there was plenty of family time to go around. But we unloaded the truck in 70 degree weather and all was well. After a few days of unpacking and debating on where to put things it was finally starting to feel real. What also felt real was the Chinese food that stayed with Annalee and I for 2 days. But that’s why they make ginger tea.

But let’s talk about music! I’ve been trying to do the whole music artist thing for over a year now with some failures and successes. Last summer I wrote two new songs and an instrumental. This year I am working on 1 new song and 1 instrumental which is the perfect amount of music for an EP! I bought a Apollo Twin Duo (which is a recording interface) but it didn’t come with a Thunderbolt cable….so I wait…. I should be able to start recording next week! 🙂 I believe I’m actually going to find a record label this time and get my music mastered so that should be fun. I also got a new pedal which I’m really excited about….I think I’ll be doing a Tpain cover soon…really excited about that.

Thanks for tuning in! I hope to post on my blog 1-2 times a month for some updates. 🙂

So I have been in Davidson NC for a year after graduating from UNC Asheville and I have learned a lot! I’ve loved being able to teach guitar lessons to people of all ages. I had a student as young as 7 and someone in their 60’s! I’ve played awkward gigs and great gigs. I’ve worked at a coffee shop to make ends meet and have really experienced what a first year out of college can look like for a young musician.

Now there is a new chapter of my life about to unfold. My wife and I are moving to… NEW HAMPSHIRE?! She got a great job at Dartmouth College and we are moving June 15th. I can’t wait to experience what New England (and maybe Canada?) has to offer. This past year I have had to accept every little thing to make money that I could. But now I have the chance to really grow as a musician and person by accepting things that I think will really benefit others and myself.

I have been selling a lot of music equipment and I have a strategic plan on buying different/better things to advance my music goals! First step is installing some new pickups and getting some better pedals. I’m also going to be buying a better camera and shooting more videos. Also new recording equipment is on my radar to record a new EP